Karakai Jōzu no Takagi-san: The Movie

Karakai Jōzu no Takagi-san: The Movie (劇場版 からかい上手の高木さん, Literally meaning "Teasing Master Takagi-san The Movie") is an Japanese animated film based on the Japanese manga series written by Sōichirō Yamamoto. The movie was initially teased in the August 2021 issue of Shogakukan's Monthly Shōnen Sunday magazine along with the release of details on Volume 16 and officially confirmed alongside the announcement of the third season of Karakai Jōzu no Takagi-san in September 2021. The movie will be directed by Hiroaki Akagi at Shin-Ei Animation from a script written by Hiroko Fukuda, Aki Itami, and Kan'ichi Katō. The movie is expected to premiere in Japan on June 10, 2022.

The staff from the third season were announced to be producing the movie in March 2022, with Rie Takahashi and Yuki Kaji returning to reprise their respective roles as Takagi and Nishikata. Additional staff and cast of the film were revealed in April 2022.

In the movie, Takagi and Nishikata spend the last summer of their third year in junior high school together.

A day before the start of the last summer in their junior high school, Takagi and Nishikata find a kitten on their way home, which they named Hana, and decide to take care of it until they find its mother.

Teasing Master Takagi-san: The Movie is set to be released by Toho Visual Entertainment in Japan on June 10, 2022. Sentai Filmworks licensed the film in December 2021, and it will be streamed on HIDIVE. 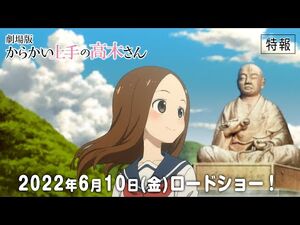 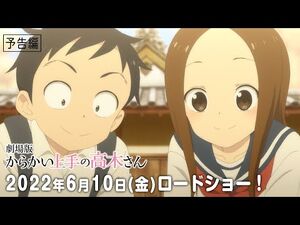